Trauma inheritance can be prevented

Severe stress affects even the next generation – through epigenetic trauma inheritance. But thankfully, the damage done can also be repaired.

Severe trauma permanently affects the body and one’s behavior and is even passed on to the offspring. But this is not an inevitable fate, as illustrated by a team of Swiss scientists led by Isabelle Mansuy. The scientist conducted mice experiments to show that epigenetic inheritance can also be reversed under certain circumstances. In the experiment, she subjected new-born mice to stress through repeated temporary separation from their mother, which in turn led to permanent behavioral change. Under normal circumstances, the mice and their offspring exhibited significantly altered behavior. However, with an environment that was adapted accordingly, Mansuy succeeded in rectifying this behavioral disorder in the adult mice – and their offspring also showed no trace of trauma. 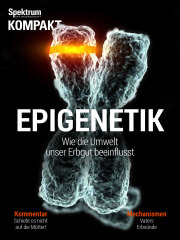 This might also be interesting for you: Spectrum Compact: Epigenetics – how the environment affects our genetic material.

One cause of hereditary trauma is an epigenetic effect: Here, it is not the genetic code that is altered, but other factors around the DNA that are also passed on via the germ line. (1) *

Stress makes certain methyl groups in the gene disappear from a glucocorticoid receptor. This affects the hippocampus, part of the brain that regulates stress and anxiety. This demethylation results in the formation of more receptors in the cells, and in the behavioral changes. Since the changes are at a molecular level and take place in the germ cells, the offspring also has a similar reaction. However, Mansuy’s experiment shows that all this can be reversed in a particularly stress-free environment: Apparently, the missing methyl groups can be reversed under certain circumstances – an indication that epigenetic defects can also be targeted and even corrected.